In a couple of weeks in January I was  totally immersed in the North-American expat life in Cotacachi even though I tried to avoid spending too much time with other foreigners in town. Yet, invariably upon encountering a white-skinned person on a street or trail, we said hello, introduced ourselves and started talking.   That is one of the benefits of being retired: there is time to learn to know new people and chat. In addition I played pickle ball three mornings a week, and all fellow-players were from North America. 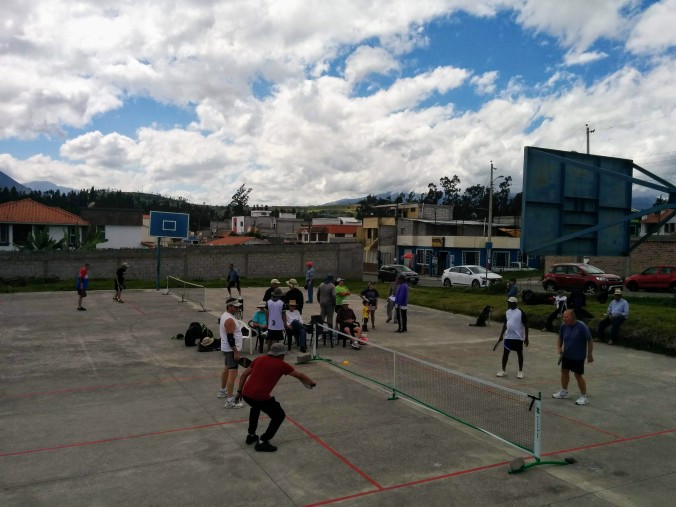 Photo: It was great to be able to play outdoors with the temperature being in the low 70s in the mornings.

Somebody told me there are about 700 Canadian and US immigrants living in Cotacachi, where the total population is around 10 000. Of the other nationalities I only met one Norwegian, who is married to a retired American. In the neighboring Otavalo, at half an hour’s bus ride, there were supposedly lots of retired European immigrants, but I never met any of them on my trips to Otavalo.

I asked many expats what they liked best in Cotacachi. Everybody, except for one, answered:  “Ecuadorians”. They are genuinely (or generally) friendly, helpful, modest – especially women and children – and seem to be happy no matter what their living conditions are. This is a bit strange, because poverty is  striking. Every day I saw small, old people without shoes on the streets, and the Lugar de Esperanza-soup kitchen was full of poor old people, who got a free breakfast every day. As far as I heard, it was the only daily meal for several of them.

One of the responders who hates Ecuadorians said: “They are all thieves”. He was dreaming of moving to some poor country in the Balkans once he had enough money saved to leave Ecuador. So far he has been “forced” to live in Ecuador for four years… 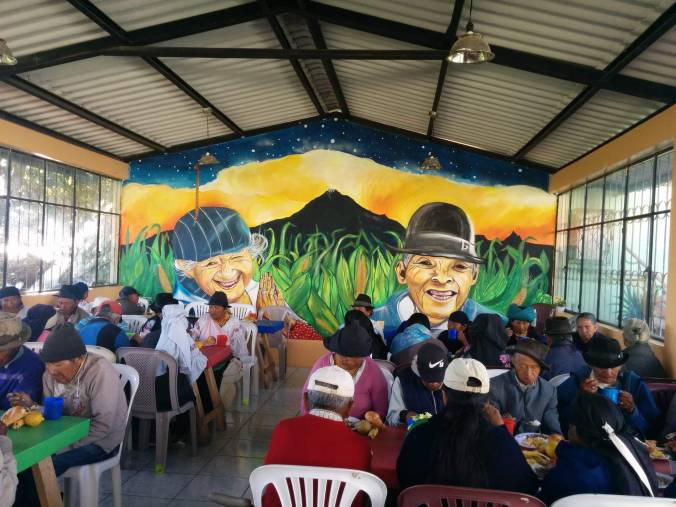 Photo: Many expats volunteer a couple of mornings serving and cleaning in the “Place of Hope” -soup kitchen funded by donations

One reason why some North-American retirees have moved to Ecuador is because they can’t get by on their US pension in the US (typically 800-1100 dollars), where especially health care is very expensive. It is not always enough even to live in a trailer park…

Canadians on the other hand have free health care and better benefits than their neighbors, but even they say they have economically much better conditions in Ecuador. Basic health care is free in Ecuador but all foreigners I talked with said they pay about 70 dollars for health insurance. A visit to a doctor costs typically 10 dollars. A doctor is not always needed, according to some expats, who said they get expert advice at pharmacies and can even buy  antibiotics without a prescription.

The second most common reason to move to Ecuador seems to be the climate. Up at 9000 feet in northern Ecuador the temperature during the day is in the low 70s, and by night in the 50s. During my six week stay I experienced two partly rainy days, while I was told this was the rainy season. The locals don’t normally have any heating in their homes, but sleep under a couple of woolen blankets.

The third reason why many expats chose to stay in Ecuador is healthy and cheap food. It is still an agricultural country and at least in the Cotacachi region one could find organically  grown vegetables and fruit everywhere. At all four Airbnbs where I stayed, I got a delicious breakfast with some egg dish, home-baked bread, fresh cheese, juice made from various exotic fruit and Ecuadorian coffee. Lunch I ate often at the foodcourt next to the central market where one could get for two and a half dollars a soup or salad and a main course with meat, fish, vegetables and rice, quinoa or potatoes. A drink, typically a soda or  a fruit juice was included in the price.

During the first two weeks I ate dinner with my Airbnb-family who lived on a farm in Tunibamba, several kilometers from any restaurants, but when I moved to other Airbnb’s I started eating at various restaurants. For under ten dollars one could get a big, healthy dish with some artisanal beer. 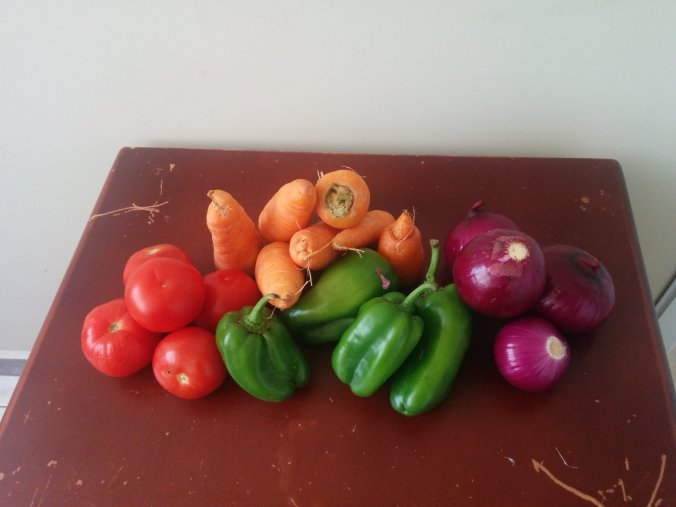 Photo: This is what I bought at the market for a dollar one day, when I planned to make a vegetable soup.

Only a few of over 100 North-Americans I talked with, missed their home country. Many had come to Cotacachi from megacities like Chicago, New York or Toronto and appreciated the more peaceful and simple way of living. Maybe one should not compare megacities in the north with small towns in Ecuador, but I believe that very few American retirees would move from big cities to some small town in their own country.

Traveling seems to be a popular pastime among the expats in Cotacachi and almost every expat I met had been around not only in Ecuador but also to many countries in Central and South America.  Ecuador is a small country and the distance from the mountains in the north to the South Pacific beaches in the west or to the Amazonian jungle in the east isn’t too great. It is also cheap to rent a car with a driver to take you to various places. I had a vague idea of taking a trip to the Galapagos Islands, but that is an exception to the cheap prices and I dropped the idea.

Most of the time I was taking local buses to other small towns. It costs 35 cents if you are under 65 and 25 if you are over. A taxi trip of a few kilometers costs $1.50 and the longest one I took lasting 40 minutes was three dollars. Also domestic flights are cheap: for example one can take an hour flight from Quito to Cuenca for about 50 dollars.

I never felt unsafe in buses or taxis. On the contrary. Often fellow passengers asked curiously where I am from, and whether  it was normal for elderly women in my home country to travel alone abroad (I think it is). Several times I also had an opportunity to help students with their homework , especially when the traffic was moving slowly because of road works.

Also on other occasions I was teaching English. One Wednesday evening I was invited to a rural community to teach English to a Kichwa-mother and her 10 year old son. To start with I asked what kind of vocabulary they wanted to learn. “Cleaning words”, was the answer. It was obvious, since expats’ homes, gardens, building projects and transportation offer a lot of job opportunities for locals without much schooling or vocational training. Foreign retirees even with a small pension can afford to hire house help, because they can rent a two-room apartment for 300 dollars and utility costs are minimal. The locals earn on average 400 dollars a month at full-time jobs and there is a shortage of full-time jobs many places. 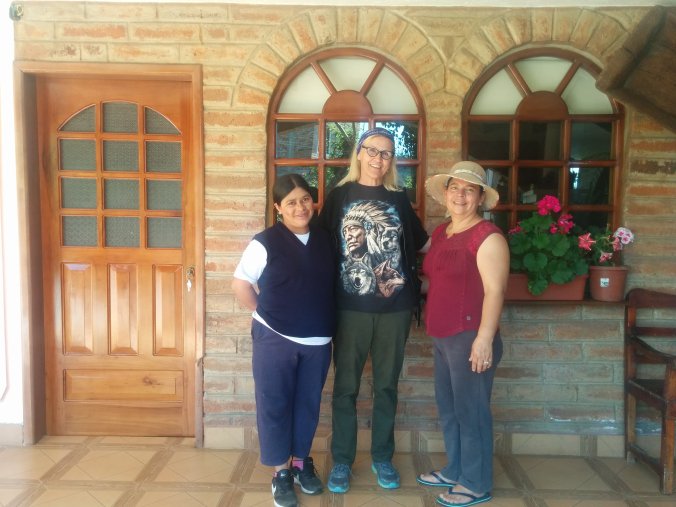 Photo: On the left the landlady of my last Airbn in Cotacachi, and on the left her assistant. Together we went gathering up the cows from the field before the sunset.

My six week stay was too short to get irritated with any bureaucracy or inefficiencies in the Ecuadorian society, even though I noticed hints of them. In any case I think I could easily enjoy life as a foreign retiree in Ecuador. I would also recommend it to all solo traveling women who want to explore a rather safe South-American country. However, it would be wise to learn at least the basics of the Spanish language to be able to speak with Ecuadorians. Otherwise there is a risk of getting stuck with gringos, which in itself is enjoyable.

3 thoughts on “Immersing in expat life in Cotacachi, Ecuador”