“Four friends and I travelled for a month by train in Europe. We saw Sweden, Denmark, West Germany, Austria, Hungary, Yugoslavia, Italy, Switzerland, Belgium, maybe even the Netherlands. Then we returned to Finland through Germany, Denmark and Sweden”, I answered to my Philosophy teacher’s question  about what I had done during the summer vacation.

The whole class of 16-17 year old girls was watching me with a mixture of admiration and jealousy. In 1973, the European Inter-rail program was in its second year. Inter-rail made it possible for youngsters less than 21 years of age to travel around in 21 European countries by train for about 50 dollars.

“Did you at any point of time step out of the train”, the old, bold teacher asked ironically.

Some of the girls laughed approvingly at his question, while I only managed to mutter something like “yes, of course”. None of my travelling companions were in my class, so they couldn’t support me. The teacher had already moved to the next student asking what she had done during the summer vacation.

My five Inter-rail travelling companions and I had worked hard the whole month of June and some of us even during the winter to save money for this big adventure by train. We were all girls and yearned to see more of the world than our own remote country far up in the north of Europe. None of us came from wealthy families and none of us had travelled with her parents abroad.

But we were determined to travel and see the rest of Europe. The strategy was to travel as much as possible by night to save money and time. What we had not expected was that in July tens of thousands of curious youngsters would be travelling around in Europe and that trains would be full. Therefore we ended up sleeping in corridors on many occasions, and in spaces between cars. Sometimes the two smallest climbed up to the luggage compartment to sleep there.

When reading my diary from that trip, it appeared that in 1973 we had experienced an extraordinarily hot July in Europe. We were often sleep-deprived, exhausted, thirsty and hungry when we arrived at a new place. We seemed to be lost often, taking wrong trains and not being able to keep our bearings on city maps in various big cities.  Often we arrived in a new country during siesta when banks, shops and eating-places were closed.

All countries in Europe had different currencies at the time and the safest exchange medium was traveler’s checks. However, one needed to go to a bank to change those to hard currency. Therefore the first thing to do in a new country was to go to a bank. Without a GPS and Google it was sometimes challenging to find a bank and especially a bank willing to change our checks for a reasonable rate. Banks were not marked on our maps. Asking locals was the best way to find one, but sometimes locals were so eager to help that they sent us to various directions without knowing themselves where there was a bank. It is also possible that we did not understand their gestures correctly and our knowledge of foreign languages was limited.

However, that first trip to foreign countries taught us many lessons. We gained confidence because we solved many new problems, such as where to find a place to sleep for the next night despite the seemingly full occupancy due to the vacation period. We learned what to be hungry meant, and how it affected our brains (= decreased your intelligence considerably!) We lost a lot of weight and some of us even skipped our periods, even though we were only travelling a month. Despite of all physical inconveniences and practical problems, the beauty of old cities such as Wien, Budapest, Venice, Florence, Rome, and others overwhelmed us. 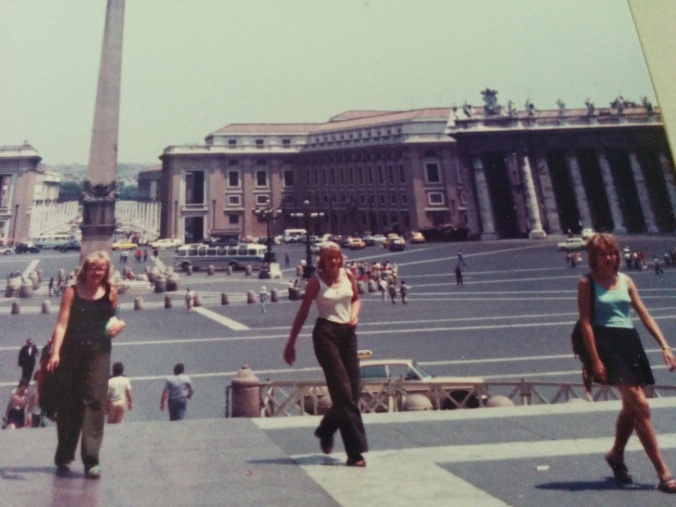 Looking back, the biggest eye-opener, at least for me, was that there are many helpful people who are not Christians. Somehow growing up in a rather isolated country with a Lutheran state church had indoctrinated me to think that Christians are somehow better people than others – despite of crusades, witch hunts, and many other evil deeds perpetrated by Christians in the past.

One of the young people with whom I discussed this theme was a young Hungarian atheist, Antal. He guided and helped us for a couple of days in Budapest. His philosophy seemed to be that we are here to help each other. He had been helped on his trip in East Germany and now he had a chance to help us. That was so simple and beautiful!