My daughter’s father fell in love with a man 20 years younger than he. I sighed of relief, even though I was annoyed. That explains so much, I thought. I had asked him to move away from me and the children a year earlier because I felt like I was choking. We had been arguing continuously, over all kinds of everyday things. He did not want to move, because he thought we still had a perfect family.

After the separation, he tried to interfere in my life in many ways. But his new love made him turn his energy to the creation of a new future and a new circle of friends. Solving the new problems also took his energy – from my point of view quite appropriately. My ex’s engineer-father, who owned a large construction company, found it hard to accept that his middle-aged engineer son moved in with a young, beautiful man. His mother was quicker to adapt to the new situation and became friends with his son’s new partner. His siblings seemed to keep some distance because they wanted their relations with the family patriarch to remain good.

The situation offered an opportunity for me to function as a facilitator. Hence I invited my ex’s and his partner’s relatives to my daughter’s birthday. They came, got to know each other, and the internal tensions of the family lessened. The relatives obviously thought that if I accepted my ex’s new love, they should know how to “forgive”. There may have possibly be more hidden feelings of deception under the surface: how did a heterosexual man suddenly become homosexual?

However, I am pretty sure that my ex had never quite dared to think about his sexuality in depth. It simply did not fit with the male construction industry, where he worked. But when he met the right person, the pieces fell together.

Now the two men have been happily married for more than ten years. Both wanted common children and moved to the US for a couple of years. There it was possible to become biological fathers. A surrogate mother was fertilized with an unknown donor’s eggs in a laboratory. First the couple got two girls, and seven years later, another one, who is the full sister of the previous ones. She just had to wait in the freezer for seven more years.

My daughter loves and cares for her little sisters. I meet them sometimes at family parties or at our cottage in Denmark. The daughters are lovely, well-balanced children who admire their fathers. The fathers started a non-governmental organization a couple of years ago. It’s called ‘Dare’. Its purpose is to support people who cannot have children the normal way and who do not want to adopt . The website of the organization can be found here http://www.daredanmark.dk

Today I was marching with my ex, his family and other Dare-people in the Copenhagen Pride Parade. 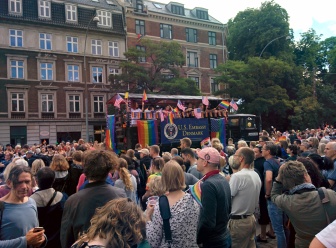 US Embassy in Copenhagen Pride Parade 2017 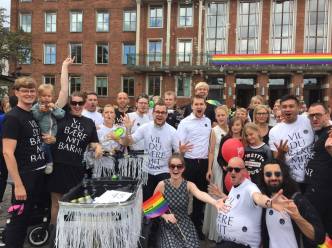 DARE waiting for the parade to start

2 thoughts on “Under the rainbow”